Sheetala Ashtami; the Sick and the Stale

HomeAurangabadSheetala Ashtami; the Sick and the Stale 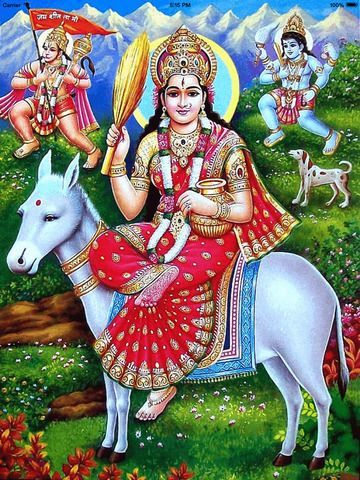 Sheetala Ashtami; the Sick and the Stale

Taking its name from the word ‘basi’ meaning spoiled, Basoda involves eating stale food usually made the previous day. This auspicious day sees the worship of Sheetala Devi, the goddess of pestilence. Old food is consumed in reverence of the deity, so as to not invoke her wrath and gain protection from sickness and disease.

Major celebrations are observed in many states including Rajasthan, Madhya Pradesh, Gujarat and Haryana. Large spreads of delicious food are prepared beforehand and even distributed amongst the poor and needy to gain the favour of the goddess.

Said to be an incarnation of Durga, Sheetala Mata is a peculiar goddess who rides a donkey. She carries a broom in one hand, a pot of water in the other, a winnowing fan on her head and a garland of bitter neem leaves around her neck. Each of these are cosmic attributes that symbolise her qualities. The winnowing fan is symbolic of purification, the earthen pot of water represents healing, the broom is to clean or spread germs and the neem leaves are to cure fever, while her steed, the donkey, is a symbol of humility. In Haryana she is often revered as the wife of Guru Dronacharya.

She has the reputation of both a wrathful deity and a goddess of purification. A double edged sword, worshipping her promises good health and protection from disease, while invoking her anger could cause her to unleash her wrath in the form of viruses, plagues and other infections and maladies that could spread uncontrollably.

Many varying tales surround Sheetala Mata and her strange powers. One such story narrates how when a village was ravaged by demons, Durga came to the rescue, taking the form of Katyayani to fight them. When Jwarasura, the demon of sickness, started spreading contagious diseases she transformed into Sheetala Devi to protect the village.

Another tale tells of King Birat, who is visited by Sheetala Devi. The king agrees to worship her, but not above Shiva, their main deity. Angered and insulted, the goddess resorts to spreading infectious diseases across the kingdom. The king finally understands his mistake and begins to worship Sheetala Devi, who cleanses and purifies the maladies. Since that day, stale food is consumed to please the goddess.

Worshippers wake up early to clean their homes in preparation of the puja or prayer. On this day, no stoves are lit to cook food of any kind, while a variety of sweets and flowers are offered to Sheetala Mata. Many followers even observe a fast, hoping to appease the goddess and receive protection from sickness and ailments of all kinds. In these dark times, healthcare workers and other groups around the world are working hard to protect us from the Covid-19 outburst. Even though simply worshipping Sheetala Devi might not be enough, there is much to learn from her. Stories of her wrath remind us that such diseases should be taken seriously, while her various aspects show us how to take care during such a time. She also reminds us through her humble yet hard working steed, the donkey, that we must remain calm and focussed in times of crisis, be it towards one’s own health or work.