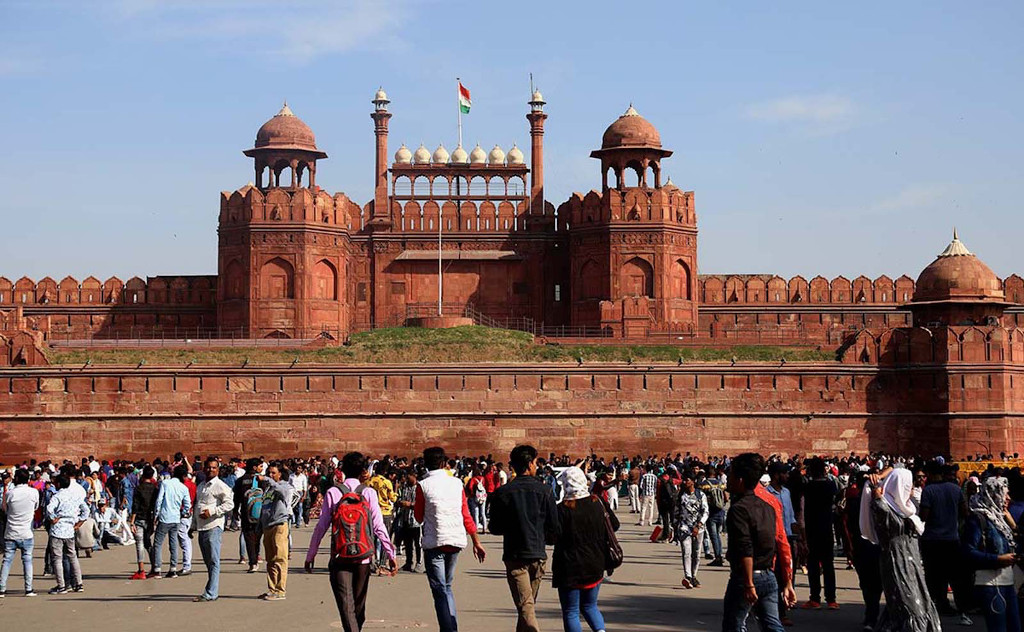 The Red Fort is an iconic monument that has found its place as one of the symbols of Delhi. It is from here that the Prime Minister of India addresses the nation on Independence Day every year, and is also featured on the 500 rupee Indian currency note. All of these add to the grandeur of this royal complex and make it one of the most visited tourist places in the country. At the Red Fort complex, you will encounter Indian and international tourists, mixing with crowds of locals from in and around Delhi, who step out to explore the city on a weekend. The crowds are full of energy and excitement, but often result in long queues at the ticket counter and the fort’s entry gate. Do make sure to account for some time that is inevitably spent in these queues because the Red Fort is certainly worth the wait!

The Red Fort was constructed between 1638 and 1648 as the royal residence when Shah Jahan of the Mughal Sultanate moved the capital from Agra to Delhi. It was originally named Quila-i-Mubarak, which translates into “Blessed Fort”. The sandstone used for its construction gives the fort its iconic red colour. Since then, the sprawling structure has seen a lot – from being turned into barracks for soldiers during the British rule, to the first flag hoisting at the time of India’s independence.

When visiting the Red Fort, you may want to keep aside up to 3 hours to explore the many parts of this very large complex – from the beautiful stone structures of varying styles, to the small archaeological museum that lies within. Based on your interests, you could consider exploring the complex beyond the central axis along which the main structures are present. At the peripheries of the complex, there is also a baoli (a stepwell) and many pavilions.

Reaching the Red Fort is easy from all parts of the city. It is located in the Old Delhi area, and is connected by roads and the metro rail. The closest bus stop is ‘Red Fort’ bus stop on Netaji Subhash Marg with more than 50 buses connecting it to different parts of the city. The closest metro station is called ‘Lal Quila’ on the Violet line. The Red Fort is also very easily accessible using auto-rickshaws and app-based taxi services. There are some interesting places in the vicinity which you can also visit when you are at the Red Fort. Explore Chandni Chowk, the most famous marketplace in Delhi, which is frequented by wholesale buyers and tourists alike. While the Red Fort marks one end of the Chandni Chowk street, the other end has the beautiful Fatehpuri Masjid, next to which you can grab the very popular Giani’s kulfi. There are many options to explore when it comes to local Delhi food within the Chandi Chowk market including the famous Paranthe Wali Gali. Many of these places are featured in HopOn India’s Chandni Chowk Food Walk. After a day full of the hustle and bustle of Old Delhi, you can head to Rajghat, which is very close by, to spend the evening peacefully.

Delhi, Places to visit in Delhi